the city of contrast

Almost 18 million people call Mumbai home. Our Indian adventure starts here. We booked a “beachfront” hotel The Citizen, because it is close to the airport and our two-day visit here is just a stopover on our way to Nepal.  In our customary fashion we explored Mumbai the way we would explore any other city, on foot.  I woke up early in the morning and took my coffee down to the beach to watch the action. At 6 AM,  Juhu Beach is a very busy place.  I can see hundreds of people, most just walking somewhere but others exercising and school children in uniforms. At no time ever did I see a lounge chair, a swimmer or any other form of relaxation. This isn’t that kind of beach. Ray and I just set off along the beach to explore.

At the end of Juhu Beach we walk up onto a local street. You could not call the trash on the beach littering – there are piles of garbage caught by an old boat. Presumably the boat has prevented it from being carried out to sea. One of India’s solution to pollution is still dilution but I think they might be near the end of that little trick. There’s no shortage of people whose job it is to  just sweep trash towards the ocean so the tide can look after it. You will never buy another plastic bottle of water after visiting India. 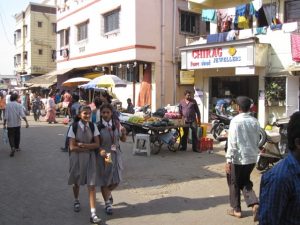 We thought we were walking through a slum when we first turned inland, but we later saw slums and this was not that.  I believe now this was just a local shopping district. It was a fantastic first impression of India. There were street vendors everywhere selling anything you could imagine. Buckets of spices, fruit, vegetables, electronics, clothes – I couldn’t possibly list it all. In among the vendors are the sacred cows that rule India, cleaning up any edible trash that’s been disposed of. There’s also goats and chickens. Children in well-pressed uniforms are heading to school. We got completely lost.

We turned a corner from this street and everything changed. The buildings were suddenly beautiful, the streets were swept spotlessly clean and there are statues and plaques and other art all honouring famous Bollywood actors and actresses. We walk past the most exclusive hotel in India, with armed guards to keep us out. On the other side of the street there is what looks like miles of trash on the side of the river, but we find out it is actually a commercial laundry. The trash is really the sheets and towels for the fancy hotels across the street. India!

We’ve walked for a long time when we think we must be getting close to downtown. In fact downtown was a train ride away. There are two types of commuter trains in Mumbai, the mixed and the women only.  There’s a lot of sex separation in India for various reasons, sexual assault being only one of them. If Ray and I had separated here I doubt we’d ever see each other again, so I  take the mixed train with him. At first I am the only woman, and then another woman boards with her husband and we nod to each other. Ray and I are the only white people.

We arrive at the Chhatrapati Shivaji Maharaj train station, a Unesco world heritage site and the headquarters of the India railway system. To say its a busy place is an understatement. Outside the traffic is like nothing I’ve seen, and to explore Mumbai we have to cross the street. To cross the street you must just dash out across many lanes of traffic, avoiding both cars and cows.

Downtown Mumbai is like any other large city. Just getting here was exhausting and we walked up and down every street looking for a cold beer. It took a long time, all we found were shops selling everything, just absolutely everything. Many restaurants here didn’t sell alcohol – almost 100% of the population belongs to religions that don’t drink.  We found a beer eventually and it was so good.

By the time we play Frogbert again to cross back to the train station and line up for our tickets, it was rush hour.  We were in controlled chaos but as we stood looking at our tickets, trying to figure out where to go, a young man came to our aid.  It is the people of India that I loved the most. This young man took us by the arm and deposited us onto our train, going well out of his way. This happened to us time and again in India.

You know those photos of people hanging out the doors of the train? That’s the kind of train that we were on. Here’s a little secret – the train is full of empty seats. People just enjoy hanging out the door and they jostle for position there. Looks impressive but we had plenty of room inside the car.

We realized the community we had started our day walking through was nowhere near a slum. The people living along train tracks, the squatters at the airport, they are the slums. Our first day in India was wonderful but exhausting. We are off to Nepal tomorrow.