or in our case Tucker 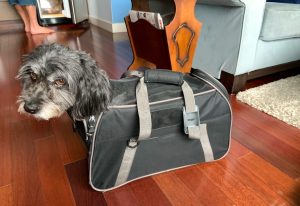 When I “ordered” my rescue dog I had three requirements: non-shedding, non-puppy and small enough to fit under the seat of an airplane. Unfortunately, it was Tucker who wrapped his paws around my neck, and my heart the first time we met.

My girlfriend Sheena said “just cram him into a bag, they won’t check at security.” I bought the largest bag the airlines will accept on board and we did manage to “cram” him into it. The result was both humorous and mildly abusive. It was clear if Tucker was going to fly with us it would be in a kennel in the pet hold.

Yours, not his. There was plenty to worry about on this particular trip, but Tucker was top of mind. I lost a lot of sleep. When we finally got to the airport we met Tucker’s travel mate Ella, and her family were as stressed as me.

Preparing for the Trip

If  at all possible, try and book a direct flight to your destination. The fewer connections the less can go wrong.

Months before the trip 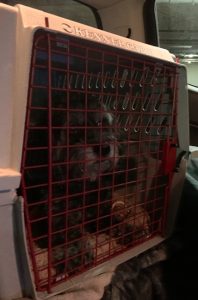 When I asked Tucker’s first family how he did in a kennel the answer was “he doesn’t.” Apparently he fought until his paws bled when they tried. This is not encouraging news, but he was a puppy then and he’s an old man of ten now. We bought a kennel and just left it on the floor. I put a comfy pillow in it and started keeping his toys in there. Once in a while I’d throw a treat in. When the grandson crawled into it, he suddenly became territorial and claimed full ownership of his temporary home (thanks Talon).

Left on his own, and over months of familiarization, Tucker got comfortable with his crate. His final test was a truck ride in the kennel. He didn’t like it, the truck is one of his happy places and he usually has free rein of the back seat, but he also wasn’t stressed.

A week before the trip

Tucker had quite a to-do list the week before the trip. We are heading to hot and sandy Mexico, so Monday was a trip to the groomers for a short, hot weather haircut. On Tuesday we were off to the vet for a certificate of health. Wednesday we tested some calming elixir – I should have drank the whole bottle over ice myself by this time.

Ray and I could fit everything we need into carry-on, but Tucker has a full-sized suitcase. We packed as many of his toys and treats that we could. He’s even got enough kibble for the month so he doesn’t need to change his diet.

The dog, that is. You should take whatever you need. Initially I thought I’d try using CBD oil. I tested one drop on a treat, an adult dose, then I tested two drops. I bought a bottle of something called “Be Calm” from the pet store for $30. It had things like lavender and ashwagandha in it. I wasn’t seeing much response.

The vet recommended drugs but I was reluctant. He prescribed Trazodone and Gabapentin, and gave me enough for a trial run.  We dosed him on Wednesday evening and I’ve never seen such a happy dog. He wasn’t sedated, just calm and happy. He even went for a long evening walk under the influence.  I know what you’re thinking, do they have these for people (apparently yes)? These drugs took a lot of stress off all of us.

In our case Tuckers drug regimen began the night before with two capsules of Gabapentin. I lined the kennel with one of my old hiking sweatshirts that hadn’t been laundered in a while so it would smell like me. The airline requests you include a bowl for water and possibly food in case something goes wrong (but no food or water in the crate). I filled a sealed sour cream container of kibble inside another empty container that could be used for water and tucked them into the front of his cage. We fed Tucker  a lighter than usual dinner. 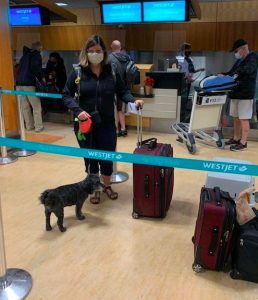 Dogs are welcomed inside Victoria International Airport and many others, including our destination of Puerto Vallarta. You may want to confirm this with whatever cities you’re flying through. That means Tucker didn’t need to sit in his kennel. It was actually quite pleasant for us all. We checked in our luggage and got all the stickers and paraphernalia for the crate.  I administered the second two Gabapentins and the Trazadone.  We had a couple of hours to go for walks and visit with Tucker’s travel mate Ella and her family. 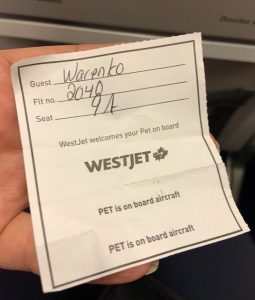 At check-in we were given some paperwork to attach to the kennel and it included three coupons that could be detached. One of them was going to be delivered to us after we were seated on the airplane. This chit was proof that Tucker was on the plane with us.  We were told to stand up and yell and scream if they tried to take off without that coupon in our hands.

When it was time to go through security, Tucker finally had to get into his kennel. They go in through the oversized baggage area. He still had that excited “going on an adventure” attitude, right up until when they wheeled him away from us. We heard him then, barking in outrage.  I got to worry about that for the next six and a half hours. 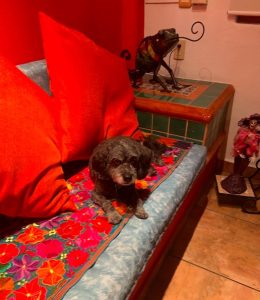 We found Tucker in Puerto Vallarta sitting quietly in his kennel among all the other suitcases in baggage. He was pretty happy to see us, but no signs of stress. And me? I was finally able to relax too.

We took a little longer at the airport because the immigration officer in the pet line had to rub every dog’s ears while giving each one a canine Spanish lesson. It was a wonderful welcome to Mexico for both of us.

Tucker is loving this country. Nothing is off limits. He comes to restaurants and grocery stores with us. The condo we chose for him has met with his approval. In these times of travel uncertainty, it sure is nice to have him with us. I would definitely do this again.

Our dental holiday – in Puerto Vallarta