We went big-tree hunting last weekend, or at least we tried to. Our journey took us into the Fairy Creek Watershed, where a battle is raging between corporate interests and environmental activists over the logging of old growth forest in British Columbia.

We were on the hunt for Big Lonely Doug.  In 2011 a forester named Dennis Cronin took on a fondness for this giant Douglas Fir, and saved it from the clear cut that was coming. Adopted by Ken Wu and photographed by TJ Watts of the Ancient Forest Alliance, Big Lonely Doug has  recently been featured in Harley Rustad’s book of the same name. This majestic monolith has acclaimed global notoriety. 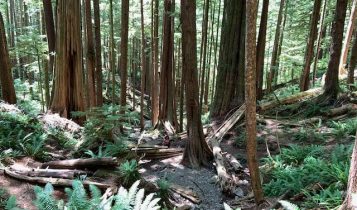 My search for big trees begins in Port Renfrew. Located on the wild west coast of Vancouver Island, just over 100 kilometres from BC’s capital city Victoria  – Port Renfrew is home to some of the largest and oldest trees left on earth. They have coined themselves the Big Tree Capital of the world.

Not just the northern terminus of the famous West Coast Trail, Port Renfrew also hosts the western Juan de Fuca trailhead. Thrust between the tourism and logging industries, this tiny outpost finds itself in the centre of a global battle.

Today Big Lonely Doug is lonelier than ever. It’s in the exclusion zone. The RCMP have set up questionably legal road blocks restricting access to most of the Fairy Creek watershed. The purpose of these road blocks is to prevent the observation of tactics the RCMP are using to enforce a court injunction against anti-logging protesters like the Rainforest Flying Squad.  Our government is protecting the rights of the Teal Jones Corporation to tree farm license 46 – the license to log the Fairy Creek watershed. Not even the press can get in. No witnesses allowed. 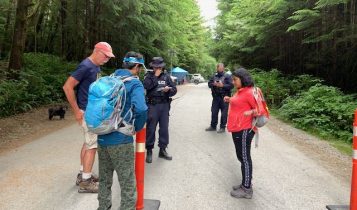 Armed police “greeted us” on this dusty wilderness road just north of Port Renfrew. They demanded our documents, our BC ID’s to be exact. I expected one of us to provide a name, maybe contact tracing or something but no, they recorded every detail of our information. No ID, no passage. Knapsacks were randomly searched, for what I’m not sure. 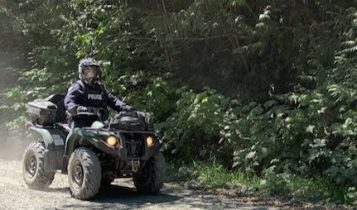 “There are no vehicles allowed beyond this point. You can walk as far as Avatar Grove, but no further,” they told us. “We are here to see Big Lonely Doug,” I said. “If you walk past Avatar Grove you can be arrested.”  Most of the tourists arriving here turned around, but some persisted past the road blocks. 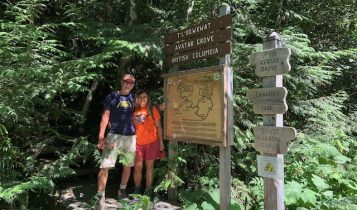 Avatar Grove is worth the trip. We hiked the 3 kilometres up the logging road to see some of the worlds biggest trees. Along the way we detoured into a clear cut, to experience the stark contrast of before and after.

We spent hours wandering through upper and lower Avatar Grove. The trails are only 300 and 600 metres long respectively, but since we’d been excluded from any further tree-hunting we spent our time here. 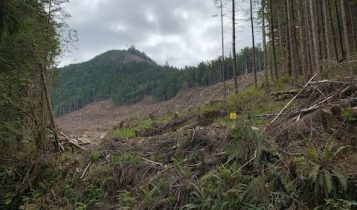 Avatar Grove is a collection of old growth forest that stands only 15 minutes drive from Port Renfrew. For two years the Ancient Forest Alliance fought, and in 2012 was successful in protecting this small collection of especially big trees from logging. They coined the name after James Cameron’s famed sci-fi movie released at the time. The catchy name caught the attention of the media. Protestors painted their bodies blue to emulate Cameron’s forest-dwelling aliens. 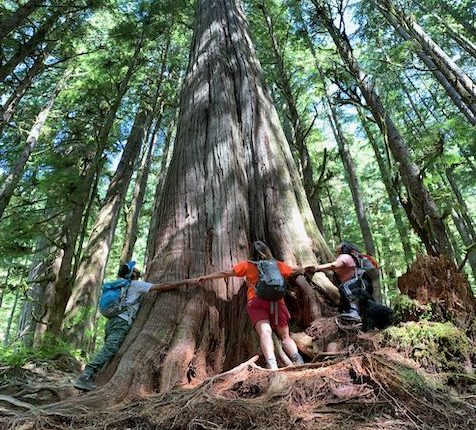 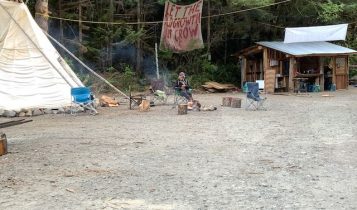 For another perspective we visited the head quarters of the Fairy Creek blockade. We’ve been here a couple of times before, but not since the police have become involved. Here we encounter a different obstacle, one blocking the police.

The blockade here is manned by a small group of earnest activists prepared to answer any of your questions.  They have prepared documents that you are welcome to take photos of (saving the trees and all).  In better days we’ve been inside the Fairy Creek headquarters, but things have changed and now it’s a working camp. Maybe another day.

Timber is British Columbia’s largest industry, inserting $13 billion into the provinces gross domestic product (GDP). 100,000 jobs in the province, a thousand of them right here in the Port Renfrew area, rely on logging.  Logging remains one of British Columbia’s most important industry. https://www.cofi.org/wp-content/uploads/REPORT_COFI-2019-FOREST-INDUSTRY-ECONOMIC-IMPACT-STUDY-FOR-WEB.pdf

But the party is almost over. Old growth logging is going to end soon, with only 2 1/2% of these ancient trees remaining. The question is, do we lose it all?

Companies like Teal Jones are in a hurry to extract the incredible profits the forest hold for them while it’s still there, and activists are wildly fighting to protect the last vestiges of the ancient trees, because once they’re gone, they’re gone.

One just needs to look east to Alberta, with it’s leaking orphan wells and solvent filled lakes to see what can happen when an industry disappears. Maintaining a sustainable industry is the responsibility of the Government, but it takes a strong and educated leader to strike the right balance.

Old growth logging has nothing to do with sustainable logging, and everything to do with massive corporate profits. There are plenty of second growth forests, they’re just not as valuable as the old growth.

It’s time to convert what remains of our ancient forests into a sustainable tourism industry, and manage the logging industry responsibly. If you agree, please take action today.

What You can Do