our mad dash through the BC wildfires

Smoke is billowing from the wildfire across the lake tonight. The setting sun is a hazy orange ball. My eyes are burning, my throat parched. Ash rains down on us all, covering the cars as if we were in a snow storm. Helicopters circle above, dragging buckets below them. It feels like Armageddon.

I’m in Penticton, watching the wildfire that’s currently threatening the community of Osoyoos and categorized as out of control. There are over 300 more wildfires burning just in British Columbia alone.

Road Trip through the Rockies

After a two month delay, we are finally hitting the road to make the long trek back to our summer home in Pinawa. For the first time we don’t feel like leaving. The idyllic life that is living on a temperate island is particularly appealing this year, but leave we must.

Our first planned stop is a long overdue visit with friends in Penticton. The sky on the ferry is clean and cool. It’s an auspicious start. We hit the mainland early (for us) but already the temperature is rising. As we head east, the mercury just keeps climbing. By the time we pull into Penticton it’s a whopping 38 degrees Celsius. That’s a reprieve from the heat dome that hit BC the week before, killing hundreds of people and potentially over a billion marine creatures. 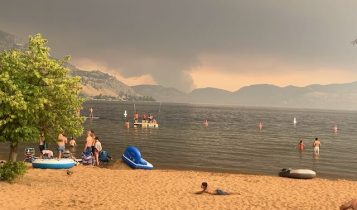 Smoke is in the air when we arrive, but no where near as thick as it gets as the evening sets in. The fire across Skaha Lake has suddenly flared up. People in Osoyoos have been told to get ready to run.

Overnight the situation worsens, and then abates around sunrise. We wake up to ash on the cars and streets, but blue sky. The air still smells acrid, and my eyes and throat are still burning. 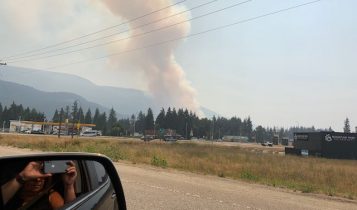 Smoke, fire and detours make what should be a short 5 hour drive to Golden much longer. The Sicamous fire is out of control and we need to drive around it. It’s a good thing we have a reservation in Golden, as the motels are filling up with evacuees. The air is toxic most of the day today. It’s been 40 days since BC has seen any precipitation. There’s a red dot on the BC wildfire dashboard map in Golden, too. There’s a fire somewhere near us. I hear people pull in at 3 AM, evacuees I imagine.

After picking up our new adventure buggy, the Outback edition of the NuCamp 320 Tab we find ourselves parked for the night in a tree planter’s camp. We have a son here so it’s not a completely random accident that’s brought us here.

The tree planters are an eclectic group of people who have been replanting the trees the loggers are felling. They plant thousands of trees a day, each.

On average it takes about 25 mature trees to sequester the carbon from a year of driving one gasoline-propelled family vehicle. In British Columbia alone, 66 million trees are felled by loggers each year. The tree planters are replacing them 3 to 1, putting over 200 million seedlings into the ground annually. It is heartbreaking to watch it all go up in flames.

This camp happens to be shared with the local loggers, and the contrast is sharp. The high paid loggers are living in climate controlled trailers with flush toilets and comfortable beds. The tree planters are paid pennies per tree, sleep in tents tucked discreetly in the bush around the parking lot and and pee in outhouses. A few lucky ones have brought a personal trailer. They told us the food at the mess tent is great, but the morning mimosas they promised did not actually materialize. We are woken at 6 AM by loud rock music, the tree planters revelry.

This tree-planting contract is just about over. On this last morning the tree planters are polled. Who wants to go fire-fighting? Who wants to go brushing (caring for trees that were planted a couple of years ago)?   Some of them will return in the winter to collect pine cones for seeds. 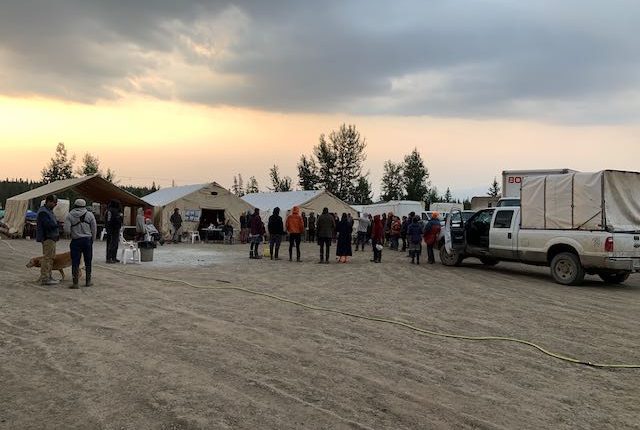 Back in Manitoba, the fields look more like October than July. When we stop for a Tucker break, my sandals crunch over the parched, brown grass. And it’s HOT, really, really hot. The news here is how farmers will feed their cattle.

There’s smoke in the air here, too.  There are over 130 wildfires burning in Manitoba today, and people are evacuating. Indigenous communities are particularly hard hit.

This is what’s it’s like to sit idly by listening to hysterical scientists warn us about an impending crisis for 40 years, and then finally get a chance to watch it all unfold.

There’s an interesting on-line model built just for Canada called the Climate Atlas. It’s a great source of information. There’s a map here, where you can watch the models unfold before you. How hot will we get if we don’t change our ways? What if we just do a little, what if we do a lot? You can even have a little fun with it. There’s a game called The Tipping Point that a climate change scientist (who happens to be my nephew) has developed.

It’s time, way past time to sound the alarm. While we as individuals need to take this seriously and consider fundamental changes in our behaviour, the very best thing we can do is elect leaders that put climate change on the top of the list of priorities. The sitting idly by strategy just isn’t cutting it anymore.