If you think a road trip through Saskatchewan is flat and boring, you just haven’t taken the right route. In no hurry this year, and towing The Ritze for the first time we chose the scenic route through Canada’s true prairie province. 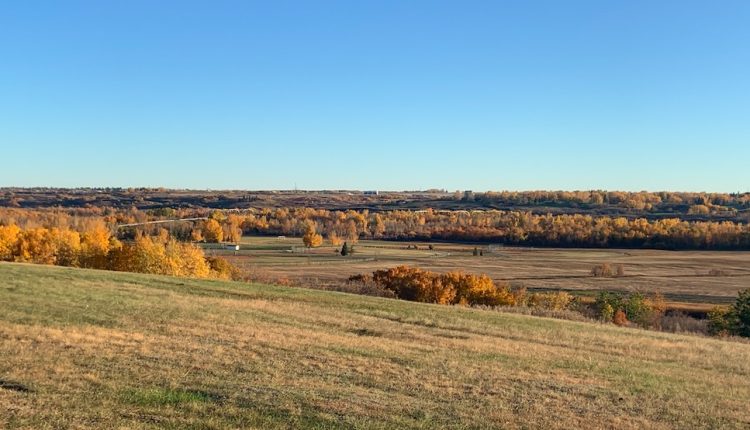 A Trip Through Memory Lane 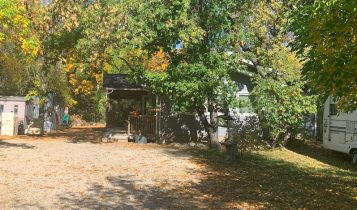 The Manitoba part of today’s drive was a trip down memory lane for me. From the north perimeter of Winnipeg we took highway 6 and then turned on PTH 58 towards Lake Manitoba Narrows.

Our family had a tiny little cottage at The Narrows when I was a kid.  My Mother had bought a lot there for $75 when they were just opening up for development. We cleared the bush ourselves, shrub by shrub with a hatchet. My grandfather and a hired hand built our modest one-room cabin. We never had plumbing or electricity but some time over the years we bought my Mom a little wood stove as a Mother’s day gift. The cabin is still there, with an addition and a trailer built onto it. I only recognized it by it’s location.

From The Narrows we head north then finally west on highway 10, past Dauphin and then through places like Gilbert Plains and Roblin. This is where my grandparents lived as children, brought here by their parents from the old country, Ukraine. They lived together in a place that doesn’t exist any more except for the place sign, Bield, Manitoba. Once they, or someone in the family owned a store in Shortdale. 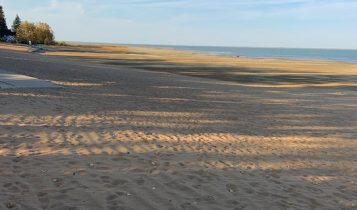 When we hit Yorkton the obvious route to take to the coast would be the Yellowhead Highway. Been there, done that so instead we turned north on highway 47, a half hour out of our way to discover Good Spirit Lake Provincial Park and discovered a hidden gem.

It was an unseasonably warm evening this night – 33 degrees C when we pulled into the park. While Ray debriefed from the long drive, Tucker and I went to find the water. Wow! The lake is huge and completely surrounded by sand beach. There are sand dunes as high as a five story building in one section. The beach park is adorable, with a board walk, disc golf and even hammocks for public use. Most importantly it is shallow, so even though it’s September 28th it’s still warm enough for a swim. We both had a great little dip. 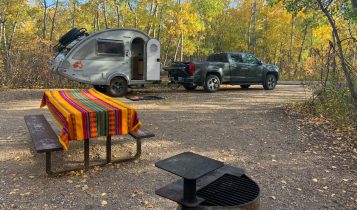 The camping spots were great here. There’s no one at the gates any more, whether from Covid or end of the season, so we just booked on-line – $45 for an electrical site that included the $10 daily park pass fee.  We scavenged enough wood from neighbouring sites to have an all-evening fire. We had our bay to ourselves this late in the season, but the washrooms were open and included fabulous hot showers. 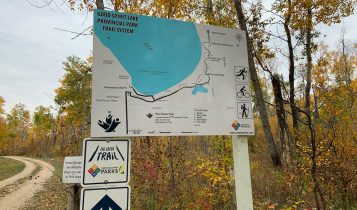 After a wonderful night here, we spent a few hours in the morning exploring the park and it’s trails. We hiked the Sand Dunes Trail, an easy 3 km stroll along the beach. From there you can continue out onto the Trans Canada Trail that is groomed for cross-country skiing in the winter. We took the dunes observation loop and then hiked back to the beach through a series of country roads. 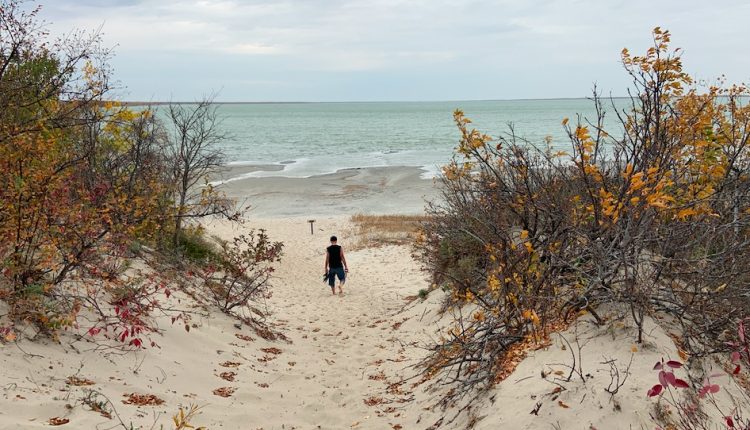 We got such a late start we didn’t make our destination of Wainright, Alberta. Instead we found a closed campground in North Battleford. We spent the night alone, off the grid and free – enjoying a spectacular view of the Saskatchewan River Valley and the lights of North Battleford.