What’s a travel writer to write about when a global pandemic has grounded her? How about a few adventures from the past, and there have been plenty.

Mesa Verde on a Broken Motorcycle

The year is 1986, married but still kid-less, footloose, foolish and poor. The bike is a 1982 Yamaha 550 Vision. We’re heading south, and west for a couple of weeks adventure, Easy Rider style.  The electrical system shut down on my bike while driving over the perimeter bridge in a rain storm in Winnipeg. Undaunted, we’ve now push-started the beast all the way to Colorado.

I find myself riding up a steep switchback road in Colorado, through the kind of construction only Americans would let you share the road with.  Someone in the campground last night told us not to miss the cliff dwellings of Mesa Verde. Suddenly a tunnel looms, and I have no headlight. We jostle into position, Ray riding right behind me so I can use his light. The tunnel is long, dark and twisty. We survive the trip up and spend a fabulous afternoon climbing around these amazing historical ruins. The trip down was not going to go that smoothly.

I point the Vision downhill and let gravity start her. Ray catches up in a minute, but something is wrong. His headlight is out. That’s annoying, we both think until we get to that tunnel. “Please God let a car come up behind us,” any vehicle at all but no, we stayed too long on the mountain and we’re now winding our way through the soft gravel all by ourselves. When we get into the tunnel it’s like driving with my eyes closed. I have never seen such darkness. I try to sense the walls of the tunnel but there is nothing, just prayer. By the time the light at the end of the tunnel emerged I was crying. I pulled over to the shoulder to recover, put my foot down and realized, nope no shoulder and I was going over the cliff.

Somehow I caught myself before dying, but you knew that ending right? We proceeded on to a hot weekend in Vegas, a couple of crazy nights in Sturgis and two speeding tickets that ended our stateside adventures for the next decade.

2017, we’ve rented a camper van and are exploring Africa for a couple of months. We’re in the Transkei, having just spent an amazing week at Splashy Fen music fest followed by some great hiking in the Drakensberg Mountains. It’s cold and we’re bee-lining it to warmer climes on the wild coast.

We’ve paid extra for the GPS in our unit, last updated in the 70’s sometime I think. There are bridges where we are directed to take ferries. We find a hidden rhino sanctuary that wasn’t hidden way back then. We are bombing happily along the N2 when the GPS weighs in. “Turn left on D1212” says the pleasant South African accent, calmly.  When Ray ignores her she repeats “turn left on D1212” with more urgency now. He brakes and turns, because you can’t ignore her forever.

The first sign that something was wrong were the stares of a few local men as we drove through a collection of rough homes. It’s like they’ve never seen a shiny white rented camper van on their road before. I waved. They didn’t wave back. Next was the bridge. It looked narrow but we’ve done this before. It’s stretched over a deep ravine but made of concrete. Have you ever driven over a swinging concrete bridge? I don’t think you should. Our wheels sunk deep into many years of accumulated wet mud and sand and thankfully eventually landed on something that held us, but the bridge wowed and swayed. Holy shit! We were pretty darn relieved to get to the other side.

D1212 turned up then. Straight up, turning frequently over tight hairpin switchbacks. A family out gardening in their yard looked even more surprised to see us than the last fellows. When the road started to tilt towards the cliff we knew we weren’t going to make it. Somehow we had to turn around up here.

Without a word of embellishment I got out of the vehicle, not just to direct Ray but so that only one of us would die. My job would be to tell the story. Inching back and forth on the edge of the cliffs he somehow got her pointing down again. I climbed back in, we sway over the swinging bridge that shouldn’t be swaying and got back to the N2 with nothing more than racing hearts and a story to tell. Ray just told me he may have peed himself a little, too. From what we could tell she was just toying with us. D1212 was no necessity. Oddly, I have not a single photo of the experience. 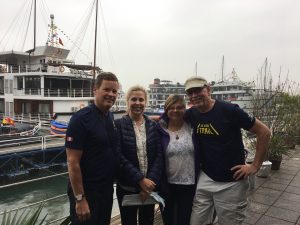 The best part of travel are the people you meet along the way. Our Asia trip, just a year ago tonight was full of wonderful people coincidences. Our first stalkers were the Youngs, Ken and Louise. We met then in Thailand, we met them in Vietnam twice and we partied on Bar Street in Cambodia. It was fantastic!

Then came Sara. We pedicured together in Hoi An, Vietnam for our first brief encounter. We had being from Canada in common, which sometimes is enough. We met for a drink later, and then bumped into each other over and over again over the next month. Mekong Delta, hey Sara! Killing Fields, Angkor Wat and finally Railey Beach, under a sky full of bats and sunsets. 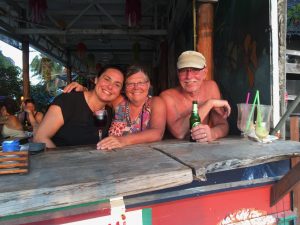 I met Elaine in Utah amid the hoodoos of Bryce Canyon, and again on Angel’s Landing in Zion National park. Little did I expect to share little plastic chairs and a hot pot with them on a sidewalk in Hanoi just a few months later. 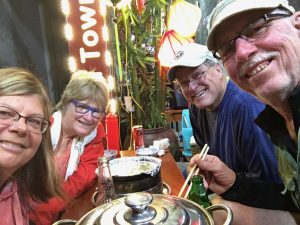 We met Gunjan and Nora, two beautiful, young adventurous women on a speed boat on the Amazon River, heading deep into a flooded rain forest. We spent a week with them in a remote lodge where land was non-existent. We swam with pink dolphins and ziplined over the canopy. They weren’t toget 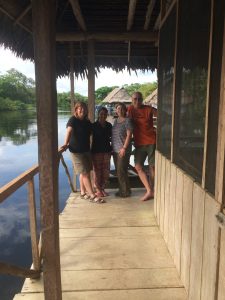 her, Gunjan is from India and Nora from Boston. We all four just became a group out there. Years later we went to Gunjan’s wedding in Dehli. A year after that her and Farhan were cooking Indian food in my kitchen in Pinawa.

There are so many more friends over the years. I thank Facebook for keeping me in touch.

Covid may have grounded us for now, but I treasure the stories, the memories and especially the group of travelers I have collected over the years. We are keeping in touch, lamenting the situation but making the best of it. Probably we all should be dead from something much more terrifying than Covid by now.

I’m sure we’ll survive a few more months of homebodiness. But you just wait till this is over!

Our dental holiday – in Puerto Vallarta