Want to know how South Africans celebrate the Easter holiday? Well, at least about 5000 of them go to Splashy Fen, a music festival in the foothills of the Drakensberg Mountains. It’s much like any music fest you might attend in Canada, but with a distinctly crazy South African flair.

First of all, Easter is not spring in Africa – it’s fall and it’s not exactly warm in the mountains. In fact it dropped to almost zero or maybe even colder (Ray did see frost on the ground) overnight. It was so cold we Canadians froze our butts off in Britzie, but most everyone else were in tents. 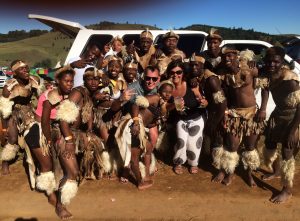 I really feel like the most culture I found so far took place at Splashy Fen. Sure we drove past the bushmen’s village in Namibia and stopped to look at trinkets being sold by the near naked Himba people in Botswana. At Splashy Fen the Zulus showed up to party and we joined right in. We sat around a fire with a great bunch of South Africans, listening to what it’s really like to live in South Africa – having a lekker time of it.

I did notice a few differences from any music fest I’ve been to in Canada. The first thing you’d notice when you drive in is the typical African chaos. If there are any rules to the camping or parking we didn’t know them. 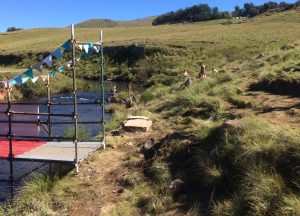 Just go wherever. Ray saw a sign pointing to Electronic camping and wisely thought this might mean we could plug in and have WiFi. I threw out the theory that it might be where electronic music is played loudly all night long. We asked the person with the vest at the corner of this intersection but she didn’t appear to speak English. Luckily, before a debate could break out, someone else walked by and said just keep going straight. Later we discovered I was closer to the mark. 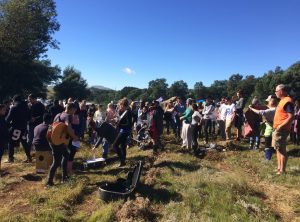 Somehow we got through the throng of people walking on the road, the cars parked just anywhere and bumped into a fairly level spot among wonderfully considerate campers, where we spent two of the coldest nights on the road trip so far. Thank goodness you could just light a fire wherever you wanted, which we didn’t but which our neighbours did for us. At night, when the music stopped, so did all the parties. Maybe it was the cold , or maybe we lucked into a great location, but this was the quietest festival camping I’ve ever experienced. 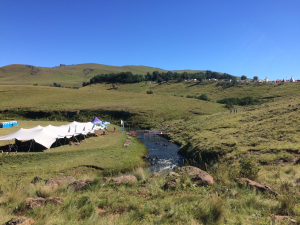 There are three stages at Splashy – the River stage is, you guessed it, down by river. Here you can lay in the warm sun, leaning on hay bales while watching one band after another – or you can bring your floaty and play in the frigid water. We did the hay bale thing.

There’s an acoustic stage in the food court where we enjoyed a couple of good bands, one of them a cover band that had everyone up dancing through their entire set. This was a great place to settle in with your stir-fry or hot dog or whatever else you purchased from the food vendors. 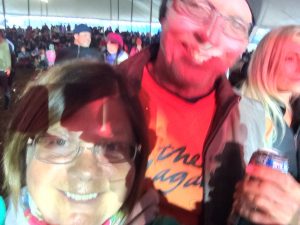 Main stage started at 5 PM and by then it appeared that there may have been some drinking going on. Again about the rules – there were no drinking rules. Buy your drinks from one of the bars available near every stage or bring your own. There was some kind of bright green cocktail being consumed by the youth out of 2 litre plastic bottles that appeared to be quite potent.

I just read the web site and its possible there was an actual electronic stage that we missed completely. Wherever it was, it was set up to somehow not bother those not inclined to that kind of music, even at night.

A couple of bands that seemed to be really big here were The Temper Trap that we missed because we showed up halfway through the festival and the Parlotones. Our new friends at the fire were amazed we’d never heard of the Parletones – they’ve gone international! They came on stage like the rock stars they are here – half an hour late and in a puff of smoke. The audience had life-size card board cut-outs of the lead singer to wave with one hand, swilling back bright green cocktail with the other. Great fun. 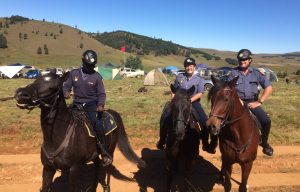 We met the mounted police, one of who has always had the dream of joining the RCMP. It was fun being Canadian here. On Easter Sunday we followed a group up the hill and enjoyed a pleasant Easter ceremony, complete with a sing along and bible reading.

The best part of the music fest were the group of kids we met across the street from us: Louis, Kevin, Byron, Stormy and Martin. I’d really like to thank them for their hospitality around the fire, the shots, the insight into life in South Africa and all around good time.

The blue plastic toilets here flush. If there’s anything I’d like to bring home to the Folk Festival it is this.