The Overnight Train to Chang Mai

So you’ve heard about the overnight train to Chang Mai and you’re convinced you have to take it. Good for you, adventurous traveller. Airports are no place to spend a vacation. Train stations are way more interesting.

You probably think this is a good way to save the price of an airline ticket, see the countryside and save a night in a hotel all at the same time and you would be right. Two tickets in second class, a top and bottom berth cost us 1800 baht ($77).  This is my experience.

We arrived at the Hua Lamphong train station Bangkok way too early. The ticket says arrive 2 hours ahead of time, but 30 minutes would be plenty. There’s not much at the station but a strange convenience store and a shady looking food court, but the people watching is good. We left and found a comfortable bar around the corner, settling in with lunch and Thailand sized beers for the wait. Alcohol is not allowed on the train, so  I guess this was our cocktail hour.

Don’t believe any horror stories you may have read elsewhere. The train we boarded appeared to be almost brand new. The cars were comfortably air conditioned, separated by state of the art Star Trek style sliding doors. The bathrooms were stainless steel and kept pristinely cleaned throughout our 13 hour journey. 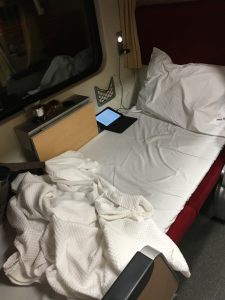 So far so good. Then things started to get Thai on us. Do we want dinner? A woman came by with a thick menu. We’d just ate so thought we’d pass, but then we thought she said dinner would be served at 8 and it’s only 6 now. Maybe we’d be hungry by then. A fellow across from us told us this was his 4th trip on the train, and it would likely be more like 9. We each picked out light meals. The lady came back and no, what we wanted wasn’t available. What about this? Or this? Or this? No, no no – finally only A,B,C or D – all full meals could be had. Quickly we each picked one. 10 minutes later we were eating two dinners we didn’t want – 440 baht – and eat fast because 15 minutes later they were making up our beds. It was 7:15. 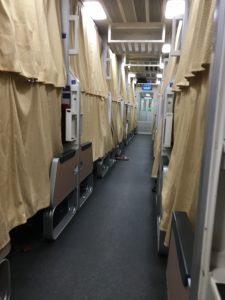 But oh boy, did I sleep. I tried to read but the sway of the train and the clacking of the tracks made it difficult to keep my eyes open. Had they turned out the lights it would have been perfect, but they didn’t even dim them. I have no idea why. My privacy curtain on the lower berth blocked most of the glare, but Ray on the top didn’t fare as well.

Early in the morning, that same dinner lady from the night before came by, asking all the sleeping passengers loudly if they wanted coffee. We didn’t even have seats yet. I thought maybe if I ordered it, they would make up my bed before it arrived, but no – Ray and I had to play crib cross-legged on my berth.

The seats did eventually get restored to the upright position, and we pulled into the Chang Mai station on time with an amazing sunrise as our backdrop. The overnight train to Chang Mai is all together a rather civilized way to travel.