Has anyone been out treasure hunting yet? Don’t know what I’m talking about? The Great Trail Treasure Hun 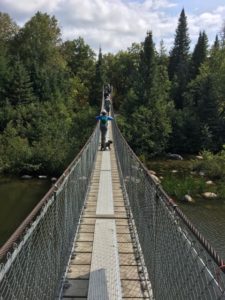 t, hosted by Canadian Geographic and the Trans Canada Trail Association has started. I had a look at the clues and I don’t think I’m letting anything go when I say I think there’s one in Pinawa!  It’s worth the look, the treasure might be MEC gear, there’s a Nikon camera, Keen footwear or a GPS available. More than one person may even find treasure in the same spot, so don’t worry if you already see a winner, or even winners here.

Start your hunt today – find the start of the game here: https://cangeotravel.ca/greattrailtreasurehunt/treasures/

Below is a little background information on the event I managed to dig up.

WHAT IS THE GREAT TRAIL (also known as Trans Canada Trail)?

WHAT IS THE GREAT TRAIL TREASURE HUNT?

To celebrate the first anniversary of the Trail’s connection, Trans Canada Trail (TCT) is joining forces with the Royal Canadian Geographical Society (RCGS) to hold The Great Trail Treasure Hunt.

WHAT IS THE DIFFERENCE BETWEEN TRANS CANADA TRAIL AND THE GREAT TRAIL?

WHY DID THE TRAIL’S NAME CHANGE FROM TRANS CANADA TRAIL TO THE GREAT TRAIL?

IS THE TRAIL COMPLETED?