I got involved this year just for some personal motivation to hit more trails on my bike. Since signing up I’ve become aware of the particularly insidious nature of children’s cancers. My neighbour’s grandson Oliver Berry is a case in point. 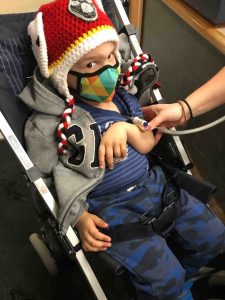 “Ollie” is 2.5 years old and the son of Ashley & Ryan Berry, grandson of Wendy and Mike Berry in Pinawa. His journey with Cancer began last November when he started developing pain in his Lumbar spine. It took weeks for his diagnosis and many trips to the ER.

When he  finally had an MRI, everything came crashing down. He didn’t even have time to recover from sedation from the MRI  before being met by 3 neurosurgeons who told his parents he needed emergency Laminectomy surgery as he had a mass pressing on his central nerves which controlled his legs & some internal organs. Basically they had to go in to get the mass and hope that the function in his legs would come back and he would get control of his bladder again. After 4 hours of surgery the surgeons came back and said they couldn’t get it all and to wait for pathology. 5 weeks later the parents received the news. He had BCOR Sarcoma, which is a very rare form of cancer that has almost no research.

After Christmas with his family and on January 5th Ollie started his first of 6 rounds of chemotherapy. Three weeks after his last round of Chemo he had to go to Toronto Sick Kids hospital where a leading orthopaedic surgeon went back into his back to try to get the rest of the tumour. After surgery Oliver was off to the Mayo Clinic in Rochester, MN where they started Proton therapy, and he is now in Winnipeg for yet more chemotherapy until the end of July. The hope for Oliver is that he will be considered NED-No evidence of disease. He will have MRI scans every three months.

Cancer is the largest killer of children from disease in Canada. Kids should be living life, not fighting for it. And so I am taking on this challenge to raise funds to end childhood cancer and give these kids the brighter futures that they deserve. Please support my challenge by making a donation through my fundraising page: www.greatcyclechallenge.ca/Riders/DonnaWarenko. All funds raised will support SickKids Foundation to provide care, develop treatments and find a cure for childhood cancers.

Thank you for your support.

Sorting through a life