Trail Maintenance by Helicopter on the Pinawa Trails

“Batabatabata”, the sound of the helicopter hovering around Pinawa all afternoon today, June 27 couldn’t be missed. Is there a forest fire nearby? A major tragedy calling for STARS over and over? No, just Marsha Sheppard and her team of trail maintenance volunteers spreading some gravel, by helicopter. 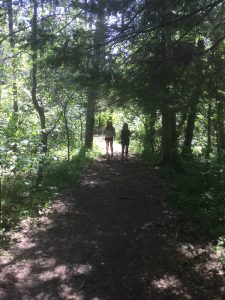 Even the “wild and wonderful” Heritage Trail needs a little attention now and then. The Heritage trail is the 3.5 k section of Pinawa’s Trans Canada Trail that runs between the Suspension Bridge and the Diversion Dam. On a nice summer weekend, the Pinawa Friends of the Trans Canada Trail’s eco-counter has counted up to 200 people PER HOUR enjoying this particular path. The Pinawa Trails Committee decided it would take about 3 yards of gravel to fix up some trouble spots just east of the Suspension Bridge. The problem? How to get 3 yards of gravel over the bridge.

“Maybe we could use a bucket brigade,” thought Marsha, “leave a pile of gravel with a sign, anyone going across could haul a bucket of gravel with them.” “We could put out a call for volunteers,” thought I, we know they’d come but many of us aren’t getting any younger. Another idea was to hire the grads, but they are now all busy graduating – today as it happens so congratulations to all of them.

The email went out early last week. The problem has been solved. Provincial Helicopters has been contracted to airlift the gravel and spread it on the path.

and here comes the the helicopter 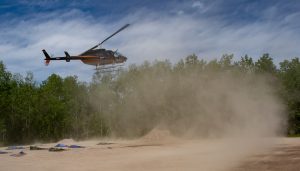 The plan developed quickly. The helicopter is booked for one hour, so we’ll have to work quickly. Marsha and Steve bought 10 tarps (really a few more just in case). We would spread them out and divide the 3 yards of gravel evenly among them. When the helicopter arrived he would pick them up one by one, and drop them on the trail where Marsha had placed flags. He would have about 5 minutes allotted per drop. 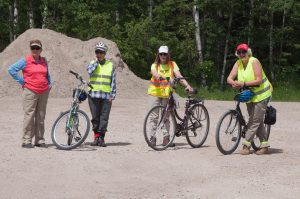 Even for a helicopter, this kind of job is rather novel. They are used to moving things around, but we were asking them to be very precise. In some locations, the canopy on the trail would prevent the pilot from having any visual of where he was dropping.

For the sake of safety, we’d have to make sure there were no hikers on the trail, or tubers on the Channel. 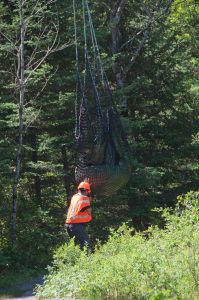 The weather today was absolutely perfect, no wind, no rain and just warm enough to be comfortable. We’d purposely kept the work quiet around town so as not to attract too many spectators, and that seemed to work. A few people came out to watch, but everyone kept a respectable distance from the work site. 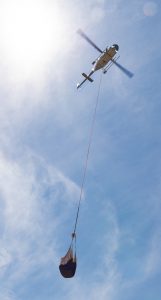 The trail was closed at 9 AM from the Diversion Dam side to make sure no one was out there. By 11:30 all the tarps had been loaded with sand and the work crew was standing by for the helicopter. Volunteers were available to ensure nobody was out on the trail. We had two photographers on hand to memorialize the work; Derrek Owen took photos out on the trail while Frank Walton positioned himself beside the tarps. Most of the photos in this post are courtesy of them.

The helicopter arrived right on time, along with a work crew of two. One man secured the gravel filled tarps into a net for hauling while the other was out on the trail guiding the load into place. In an hour it was all over. The gravel was over the bridge and dropped in place with surprising accuracy.

The Pinawa Trails Committee (PTC) is the organization that oversees all of the trails in Pinawa and their associated user groups. The PTC is comprised of representatives of the different trail users, and one Councillor from the LGD of Pinawa. Marsha Sheppard is the current Chair, Paul Crosthwaite the representative of Council.

This project cost approximately $2500. $1000 of this came from a grant from the Trans Canada Trail Association, with the remainder coming from legacy projects. No LGD of Pinawa funds were used for today’s project.

An endeavour like this doesn’t come off without a lot of volunteers.  Many thanks go out to Marsha and Steve Sheppard, the main organizers, Jim Crowe for filling the tarps, Ray Warenko, Lori Myskiw, Doreen Bigalow, Diane Crowe, Libby Crust, Florence Vilks, Derrek Owen, Frank Walton, Denis Sabourin, Provincial Helicopters and anyone else I may have forgotten. It was the coolest way to move that gravel I could have thought of.

Volunteers can expect another shout out in the near future to do a little raking.